Today we will learn about how to kick people off your WiFi? Have you shared your WiFi password with someone? Too many of us victimize your home/work WiFi net leading to a slow net and constant lag.

Learn why and the way of how to kick people off your WiFi? there’s a technique represented for every OS and device. 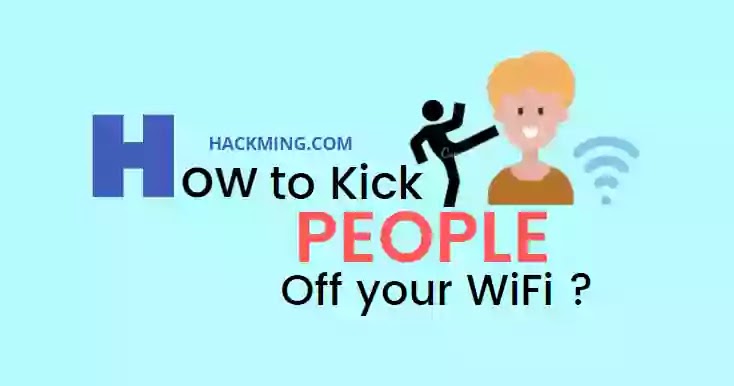 The most widespread technique to taking away users from your wifi network is by changing the wifi password of your router.

But then, this can disconnect all the opposite connected devices together with your phone and portable computer.

If you don’t need to go through the pain of re-entering the new password on all connected devices once more, here are a few of the ways how to kick people off your WiFi? 😊

How to kick people off your WiFi in Windows 10?

We are progressing to use a free app known as NetCut. it’s an older project however works fine on Windows 10.

The UI is straight out of the 90s although. transfer and install NetCut from its official website (link below).

You may be asked to put in another program known as WinpCap throughout the method. simply follow the installation wizard and you’re smart to travel for it. resuscitate your pc if asked.

NetCut can list all the devices presently connected to your WiFi network with their mac addresses. choose the mac address you would like to dam and click on on the ‘Cut’ button.

This can disconnect the net from the target device. Click on the ‘On’ button to permit reconnecting to your network.

When you begin the NetCut app, it spoofs the mac address of the router and makes the moocher’s device believe that it’s the initial router.

Now, the victim’s device starts causation all the data packets to your device (that is running NetCut). rather than forwarding data packets to the router, NetCut can drop the packets leading to net disconnection.

How to kick people off your WiFi on Android?

When it involves Android, there are several apps that may kill the net of different devices on the network.

A number of those apps embrace however not restricted to WiFi Kill, cSpolit, etc. we tend to contact the developer of Netcut, and this can be what he told us:

In the majority of these apps, one issue that’s common is that they need root access. If your Android phone isn’t stock-still, you merely cannot use any of those apps. we tend to suggest

NetCut who conjointly developed the Windows version and affirmative, desires root access too. transfer the app from Play Store, launch it, and provides root permission once asked for. explore for the device you would like to set out your network.

Click on the red WiFi image next to the device which is able to disable the net on its device. you’ll conjointly move the slider showing within the middle to change the speed of the affiliation.

Why Kick people Off Your WiFi Network?

Wrapping Up: How to Kick people off Your WiFi Network?
So, there you have got it. These were a number of ways that to disconnect alternative users from your Wi-Fi Network. the simplest means is to use dedicated apps like Netcut for Windows and Android or JamWiFi for macintosh.
If you have got any queries, let me know within the comments or tweet us. make certain you don’t use it to prank your friends as a result of you never understand if they’re functioning on a very important project or completing banking dealing.
However, a little fun once during a whereas is perhaps okay. After all, without life while not a bit fun!😃
Share
Tweet
Share
Pin
0 Shares